Eight Garden State chefs and restaurants have been nominated for this year’s awards, which recognize excellence in the food world.
By Emily Bell | February 27, 2020

It’s the 30th anniversary of the James Beard Foundation Awards, and Jersey has all the more reason to celebrate this time, with eight chefs and restaurants represented on this year’s list of semifinalists.

Among familiar names is New Jersey’s own mother of soulful heritage cuisine, Maricel Presilla of Cucharamama, who is nominated once again in the “Outstanding Chef” category. Presilla already has three James Beard Awards under her belt: “Best Chef Mid-Atlantic” 2012, “Cookbook of the Year” in 2013 for Gran Cocina Latina: The Food of Latin America, and a “Who’s Who of Food & Beverage in America” win in 2015. An “Outstanding Chef” win would not only be deserved, it would cement her culinary legacy as a highly influential voice in our national culinary conversation.

New entrants on this year’s lists include Jersey City’s 15 Fox Place, which was nominated for “Outstanding Hospitality,” and Cookie Till, nominated for “Outstanding Restaurateur.” 15 Fox Place is a unique father-and-son-run BYO Italian prix fixe out of a home in the Journal Square section of Jersey City. (And yes, good luck to all of us getting a reservation now.) Cookie Till is from Steve and Cookie’s in Margate, as well as the more recent small batch bakery concept Ventnor No. 7311. 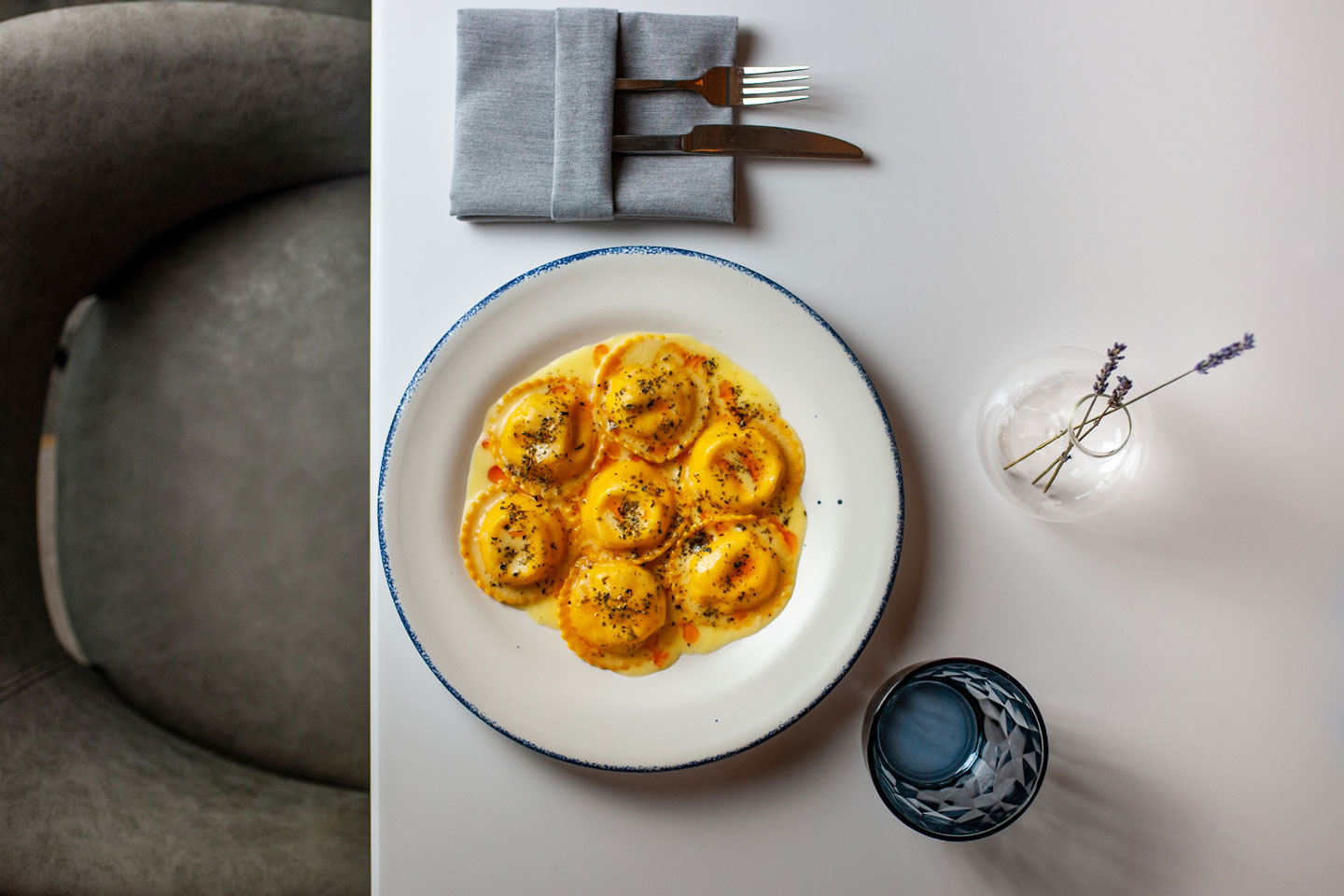 Opening his second restaurant, chef Robbie Felice fulfills a promise to himself and expands his repertoire.

Restaurant fans have come to know Robbie Felice as the chef and owner (along with his father) of the critically acclaimed Viaggio in Wayne, but his ambition has long reached farther. “On the first day Viaggio opened [in 2016],” he says, “I knew I wanted to open a second restaurant before I was 30.”

He impressed even himself. Osteria Crescendo opened in Westwood in April, less than six months after his 28th birthday. In August, it earned a place alongside Viaggio in New Jersey Monthly’s list of Top 30 Restaurants in the state.

Felice wanted Crescendo to be a completely different dining experience from Viaggio. Unlike Viaggio, it has a liquor license. Instead of Viaggio’s rustic charm, diners find a chic-but-not-snobby, modern Italian experience. To further distinguish the restaurant from Viaggio, Felice split the menu into five parts, adopting a more traditional Italian approach with antipasti, primi, secondi, per la tavola (“for the table,” for sharing) and dolci.

We started every visit to Crescendo with one of their wicked-clever cocktails. The list offers drinks for every taste, from an herbal gin and tonic made with lemon-scented Italian malfy gin, blueberries and rosemary, to the sweet-and-light In Buona Salute, a blend of vodka, grappa, fresh lemon, vanilla, apricot and ginger. Bartender Anthony Warren may be playful with his ingredient combinations and his names (Spaghetti Western, Lemon Monkey), but his creations are serious and well balanced.

Don’t overlook the option of hanging around in the bar area sampling cocktails and nibbling from the bar menu, which, inspired by the Italian tradition of cicchetti (snacks), offers small plates, such as fried calamari and house-cured salumi meant to be enjoyed with a glass of wine or a cocktail.

All the antipasti uniformly impressed my guests and me, with the fungi crespelle a particular standout. The crespelle is a homemade crêpe filled with five different types of mushrooms, which are blended into a creamy filling with stracchino, Parmigiano-Reggiano and ricotta cheeses. The crêpe is then folded, seared in a cast-iron skillet, and served with radicchio, lemon vinaigrette, herb crema and aceto balsamico, all of which temper the richness of the dish. There was also a decadent platter of charred asparagus that I keep thinking about, the roasted spears snuggled into a bed of Italian-style sauce with stracchino, hazelnut brittle, roasted garlic, parmigiano-reggiano, breadcrumbs and chives.

The Insalata di Strappata is a Felice take on tricolore salad, a staple of Italian restaurants. The snowy, slivered one he created at Viaggio has become one of its signature dishes, but this one is different. It’s especially good, and I couldn’t quite figure out why. Is it the shavings of fontina? The delicate hand-torn lettuces? (Strappata means “torn” in Italian.) It could easily be the crisp fried chickpeas dusted with malt powder. Turns out, it’s the Calabrese vinaigrette. Calabrese refers to the style of Calabria, in the toe of the geographical boot, and in this case, to Calabrese sausage. That’s right, my friends, there is puréed salami in the dressing. Say it after me: salami salad dressing. That is the kind of innovation this world needs more of.

Seriously, though, this is just one example of why Felice is an outstanding chef. Something as seemingly obvious as a salad dressing becomes a lesson in flavor layering, as the sausage itself is rendered down with a tomato vinaigrette to deepen the flavors. Maybe you won’t notice the drizzle of saba that gives the salad it’s tangy finishing pop or the savory lemon gel atop your soft-shell crab. But the result is unmistakable: involving, invigorating food.

The menu offers several fine pastas. There are a farfalle with delicate little meatballs and a rich sauce made with kale, and a spaghetti with porchetta ragù. But the star—the one I wish I could eat every day—is the pasta allo scoglio, a seafood-rich dish that tastes as if Poseidon himself delivered it fresh from the ocean along with Aphrodite.

This seemingly simple dish of thin, flat chitarra noodles and seafood mounts layer upon layer of flavor. Felice and his staff make lobster stock from shells, boil prawn heads for prawn stock, and infuse both into a light tomato sauce that is then tossed with the pasta. Nestled in and around the noodles are mussels, seared scallops, clams and lobster—each tender and sweet. The dish is crowned with a giant red prawn and a pat of uni butter.

Diners may be shocked by prices on the per la tavola section of the menu. Even as a professional eater, $115 for a 36-ounce, 30-day house-dry-aged T-bone steak still manages to make my eyes bulge a little. When I asked Felice about the prices, he said: “Per la tavola sets us apart. There’s no other restaurant in the state that does this. People will ask why it’s so expensive, but it’s for everyone to share.” Felice hopes guests will share the grand dishes not only with their tablemates, but also on social media. (This is not as cynical a move as you might think. Many of the big culinary schools now teach social-media skills to their students.)

With only me and another guest at the table, I couldn’t bring myself to order the T-bone. A table of six nearby did get it, and it looked suitably like a Flintstones-size trophy, charred a deep brown and glistening with melted fat.

My table of two? We ordered what Felice and staff jokingly call the poor man’s dry aged. At $61, this tagliata (sliced steak) comes bathed in fat rendered from actual dry-aged meat. It was the one disappointing dish I ate over my three visits. The steak, ordered medium-rare, was cooked medium-well. Flavorless and chewy, it tasted as if it had been steamed instead of grilled.

Other per la tavola items were much better, including a whole grilled branzino topped with a tangle of spring greens that fed two, but no more. The flesh was delicate, moist and definitely ready for its Instagram close-up, with tiny pink alyssum flowers and yellow pansies sprinkled over the top.

One tip: Be sure to bring a dining companion with expressive facial features, or eyes so inviting you feel no need to speak. The clamor and clatter of the kitchen and the exuberant guests ricochet off the large plate-glass windows and wood ceilings. We were reassured by a server that the restaurant would be installing noise-baffling materials soon.

Desserts were well executed but a bit wan in flavor. My favorite was the olive-oil cake served with strawberry jam and strawberry frozen yogurt.

The menu changes frequently. Felice says he prints his menus on paper so he can change the selection as his mood (and the market) dictates. So make your way to Crescendo with an open mind, an appetite and some friends who like to share. 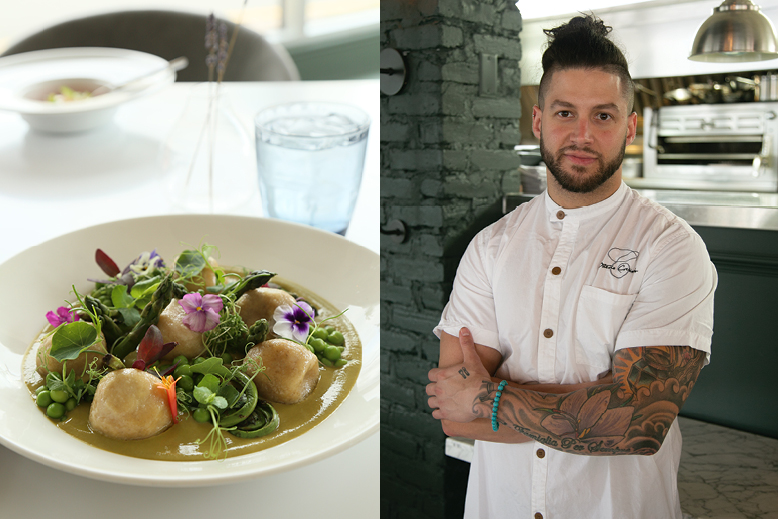 The Garden State’s dining scene and chefs are ever more dynamic, adventurous and assured.

The two immediate differences between Viaggio, Robbie Felice’s first restaurant (also on this list), and his new one, Osteria Crescendo, is that Crescendo has a liquor license and a “large format” section of the menu. With the license, beverage director Joshua Strauss has created a fascinating, all-Italian wine list and cocktails that range from the suave Suit & Tie to the playful Bei Sogni, a grown-up Creamsicle.

Felice, 28, has made the large-format page a showcase for shareable entrées. These range from brilliant creations like crisp, prosciutto-wrapped scallops in a Sicilian quinoa sauce with prosciutto crumble ($38) to a $115 40-ounce T-bone, house dry aged 30 days. It feeds one, if Godzilla is your guest, or four just folks.

One needn’t go large format to revel in Felice’s pastas, red wine arancini with gorgonzola sauce, and a ravishing rarity such as his red-prawn crudo topped with garlic crema and lemon gel, surrounded by a red pool of shrimp-head oil, shrimpier tasting than shrimp. 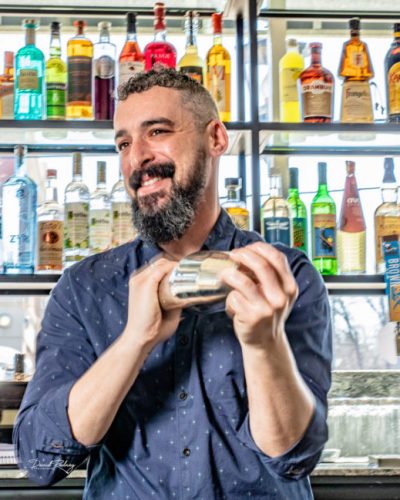 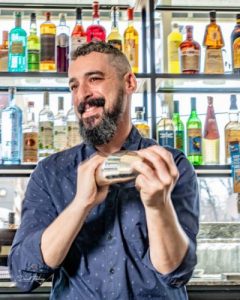 A passionate, skilled craftsman—and Wayne native—Strauss has an infectious enthusiasm for things with intimidating-sounding Italian names. And with his drinks list at Osteria Crescendo, he’s forging a union between scrupulously edited craft cocktail precision and romantically idiosyncratic, product-driven Italian flavors. We recently caught up with Strauss ahead of service to find out what it’s like at the helm of one of Jersey’s most exciting young restaurants, what “Italian cocktails” means in the land of The Sopranos, and what Italian bar ingredients we should fall in love with this summer.