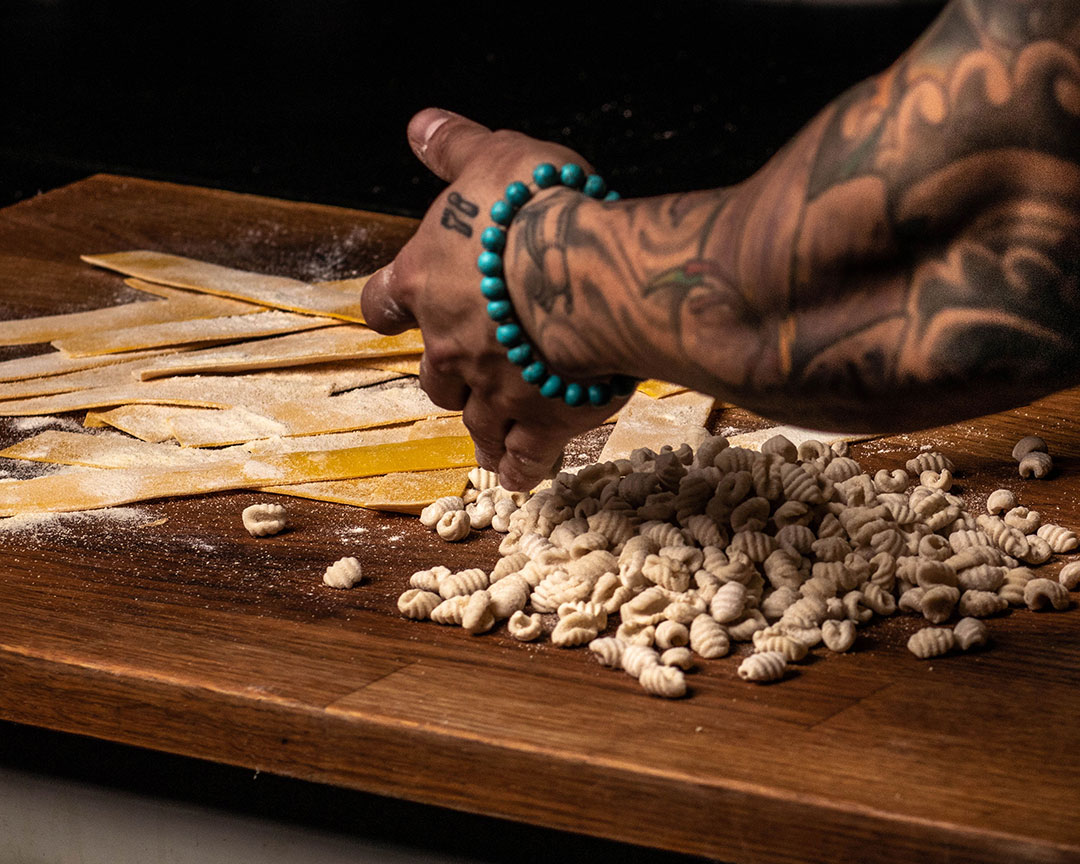 Robbie Felice is one of eight chefs competing for the title of USA Master of Pasta in April. The winner goes on to a worldwide competition.
By Kimberly Redmond, Patch Staff

WAYNE, NJ – A chef from northern New Jersey is gearing up to compete against seven others in a national pasta competition.

If Robbie Felice wins the contest at the Pebble Beach Food & Wine Festival, he’ll not only win the title of USA Master of Pasta, but will also represent America at the 9th annual Barilla Pasta World Championship next fall in Italy.

During the 2020 Pasta World Championship, 20 chefs from around the world will face off and compete for the “World Pasta Master” title. The international competition was created by Barilla as a way to “promote and share their passion” for pasta.

In a promotional video about the competition created by Barilla, Felice said he’s excited to compete because cooking “is something I’m super passionate about.”

“Pasta is literally my pride and joy. Food is art and I love making food look beautiful. It should look beautiful before you eat it. You should look down at it and want to take a picture,” said Felice, a partner/chef at Viaggio Ristorante in Wayne and Osteria Crescendo in Westwood. 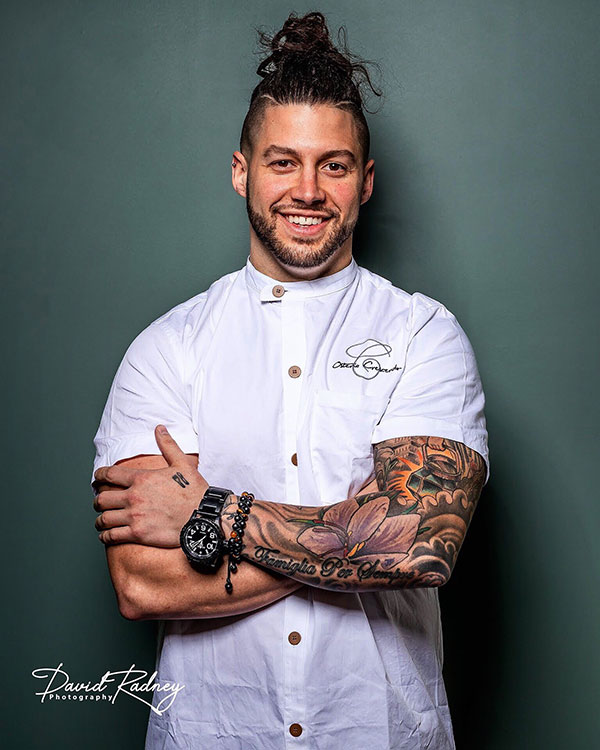 Chef/owner of Viaggio and Osteria Crescendo will bring his formidable pasta skills to USA qualifier in Pebble Beach in April.
By Emily Bell

Chef Robbie Felice has plenty of plaudits. At age 29, he owns two successful and critically acclaimed restaurants—Viaggio in Wayne and Osteria Crescendo in Westwood. Both are on NJM’s list of Top 30 restaurants in the state. Recently he was tapped to compete in the ninth annual Barilla Pasta World Championship. He will be one of eight chefs competing in the USA qualifier at the Pebble Beach Food & Wine festival, April 16 through 19. The top 20 contestants around the world will advance to the Pasta World Championship finals in Italy this October.

Felice is already tweaking—and showcasing at his restaurants—the pasta dishes he’s thinking of making in the Pebble Beach qualifier. You’ll find them in his daily specials list. Normally, Felice doesn’t use commercial pasta. He has two highly skilled, full-time pasta makers, Joyann Demont and Lisa Britting, one at each of his restaurants. He also considers himself camera shy. Nonetheless, he’s all in. 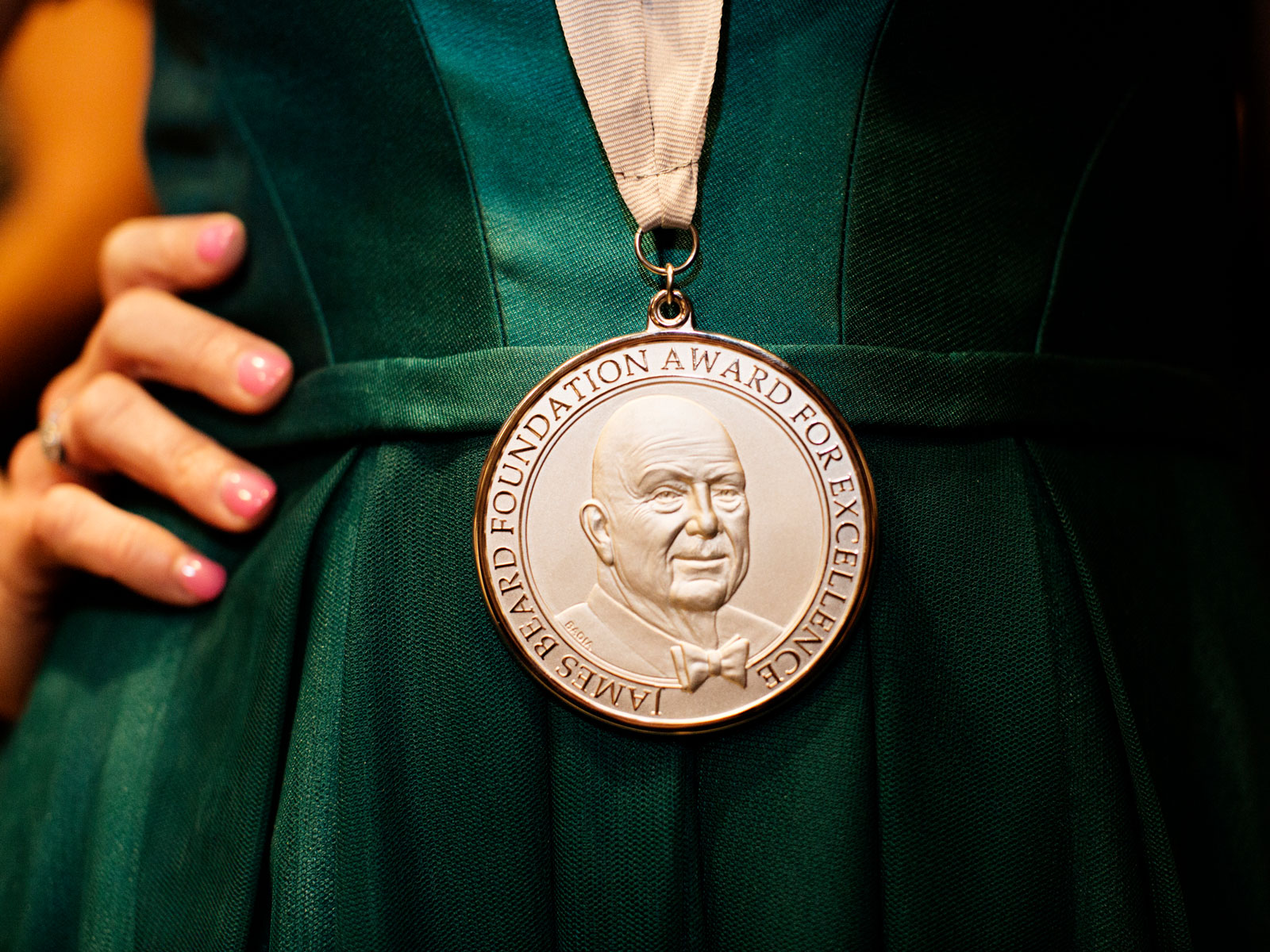 After announcing the “America’s Classic” award recipients last week, the James Beard Foundation is back with its highly anticipated semifinalist nominations for the 2020 Restaurant and Chef awards.

Come March 25, each category will be culled down to five finalists each, and the winners will be announced at the annual gala in Chicago on May 4. The Media Awards winners will also be announced on April 24, per the foundation’s website, and the Leadership Awards are scheduled for May 3. Stay tuned for more updates. 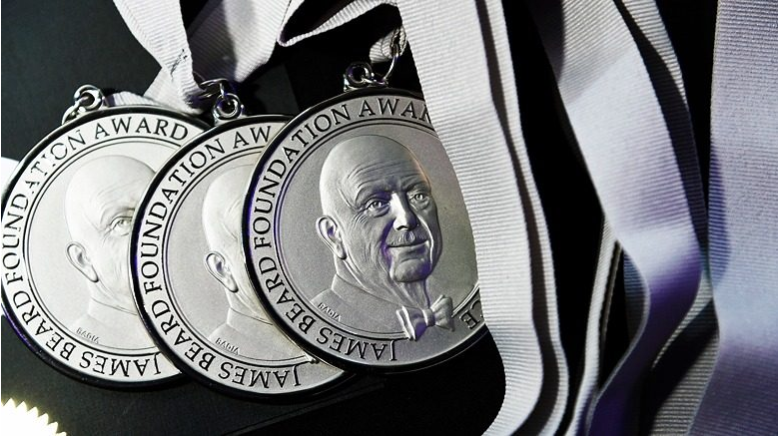 By Jeremy Schneider | NJ Advance Media For NJ.com
New Jerseyans aren’t afraid to tell you how amazing our food is. But the cuisine in the Garden State goes beyond pizza, bagels and Taylor ham, and one of the most prestigious food awards in the country is taking notice.

The 2020 James Beard Award semifinalists were announced Feb. 26, and seven New Jersey chefs, restaurants and restaurateurs were among those named. 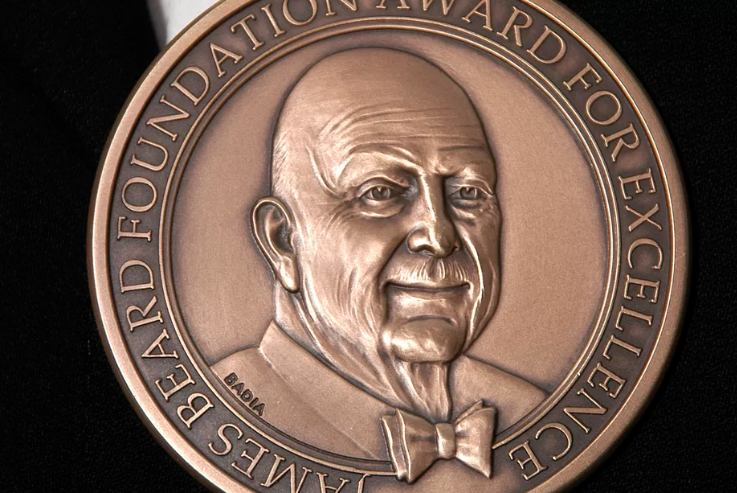 Today, the James Beard Foundation announced its Restaurant and Chef Awards semifinalists for 2020.

While last year’s awards saw changes to address the gender and racial diversity of nominees and winners, this year, the Beards are focusing on geographic diversity. For the first time, there will be a Best Chef: California and a Best Chef: Texas among the awards. This ups the total Best Chef awards categories to 12 and relegates the other states that were once apart of the “West” category to a new “Northwest and Pacific” category that comprises Alaska, Hawaii, Oregon, and Washington.

According to the Foundation, the changes are meant to address “changing population data, restaurant demographics, and culinary trends.” They also address the frequent criticism, as noted by Eater restaurant editor Hillary Dixler Canavan around last year’s awards, that the original geographic categories were unfair to the West, Midwest, and Texas: chefs from California consistently dominated in the “West”; Chicago stole focus in the “Great Lakes”; and last year, Texas was completely shut out of the awards despite being home to major dining destinations like Austin and Houston.

After the judges and committee members vote, this “long list” will drop down to five finalist nominees per category, to be announced on Wednesday, March 25 from Philadelphia. Winners will be announced during the James Beard Awards Gala in Chicago on May 4, where the previously announced six America’s Classics winners (one more honoree than in previous years) will also be acknowledged. (Meanwhile, media awards winners will be revealed on Friday, April 24.)

Announcing our 2020 Restaurant and Chef Award semifinalists! Read on for the semifinalists in all categories, from Outstanding Restaurant to Rising Star Chef. We’ll announce the final Restaurant and Chef Award nominees, as well as the nominees for our Media and Restaurant Design Awards, in Philadelphia on Wednesday, March 25. The nominee announcement will begin at 9:00 A.M. ET and will be streamed live (check back soon for details). Nominees will also be announced in real-time via our Twitter feed.

The 2020 James Beard Awards presented by Capital One will mark the 30th anniversary of America’s most coveted and comprehensive honors for chefs, restaurants, journalists, authors, and other leaders in the food and beverage industry. The 2020 James Beard Awards Gala will take place on Monday, May 4, at the Lyric Opera of Chicago. The 2020 Leadership Awards will be held on Sunday, May 3 in Chicago, and the 2020 Media Awards will take place on Friday, April 24, at Pier Sixty at Chelsea Piers in New York City. Tickets to both the Awards Gala and the Media Awards will be on sale beginning March 25 at jamesbeard.org/awards. 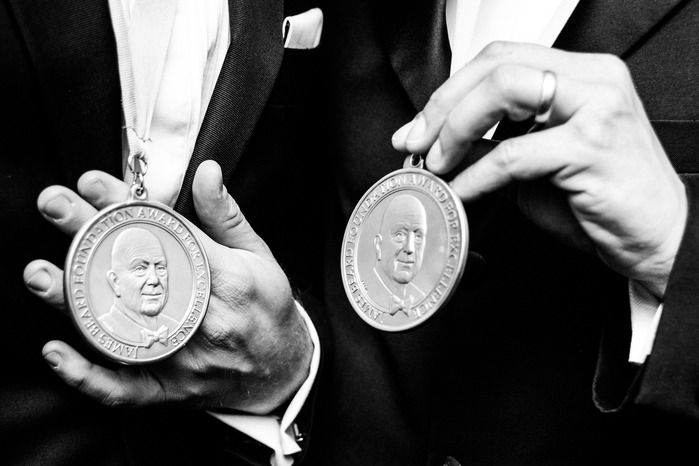 This morning, the James Beard Foundation shared the list of semifinalists for the 30th annual James Beard Awards, highlighting some of the most talented, creative, and accomplished people working in food throughout the United States.

Last year, the foundation announced the biggest shake-up to the regional Best Chef categories since 2007, and this is the first year it will be in effect. California and Texas are now their own regions; Alaska, Hawaii, Oregon, and Washington State have been combined into a new “Northwest & Pacific” region; Colorado, Idaho, Montana, Utah, and Wyoming are now part of a new “Mountain” region; and New York City, once its own category, has now been combined with the rest of New York to form the “New York State” region.

Still, New York City is well-represented among this year’s nominees, with Sam Yoo’s Golden Diner making the Best New Restaurant nominees list; Existing Conditions and Brooklyn’s Leyenda making the cut for Outstanding Bar Program; and SriPraPhai landing among the Outstanding Restaurant nominees. Tune in on March 25 when the semifinalists list is narrowed down to this year’s finalists, and see who wins when the awards take place in Chicago on May 4. 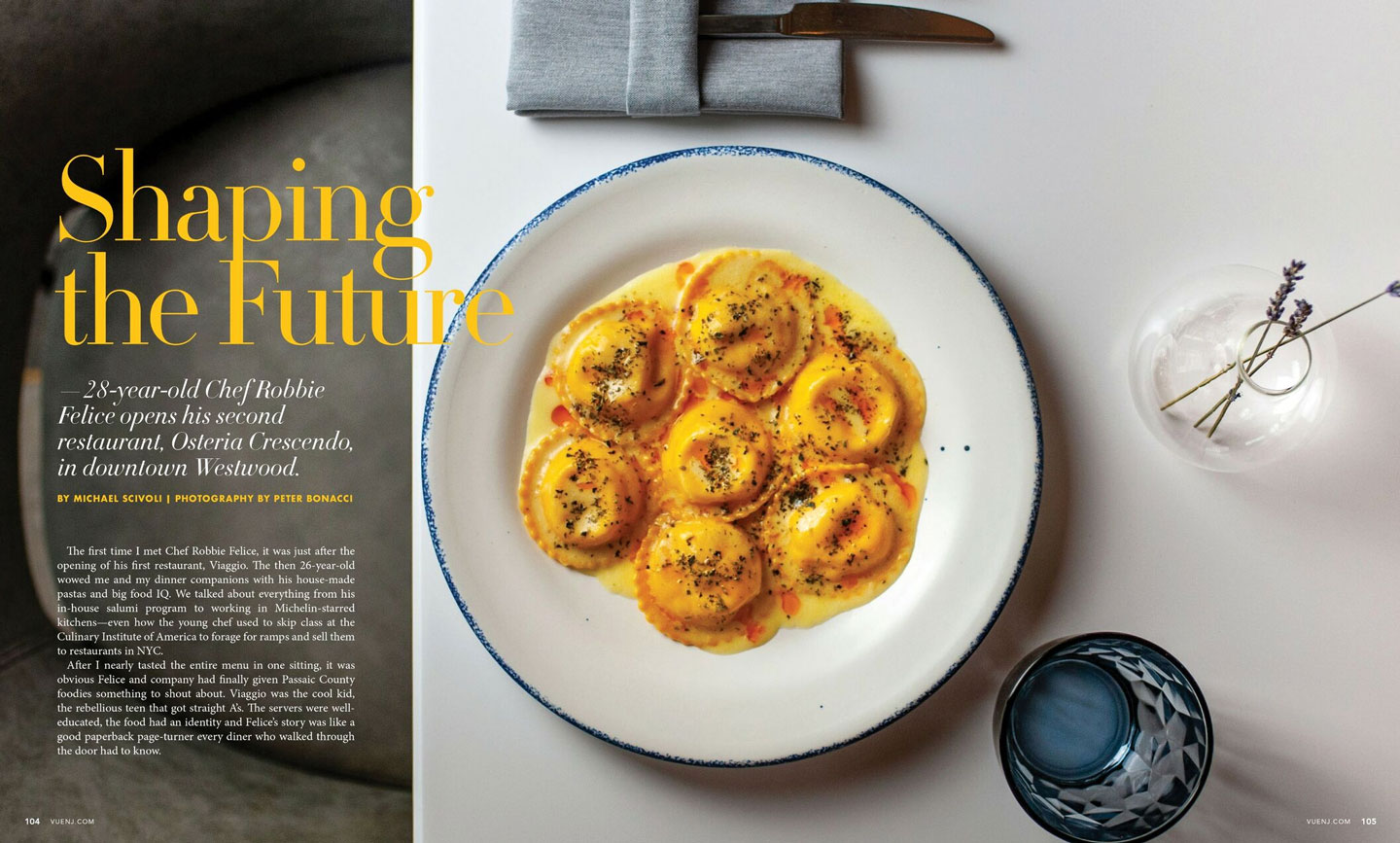 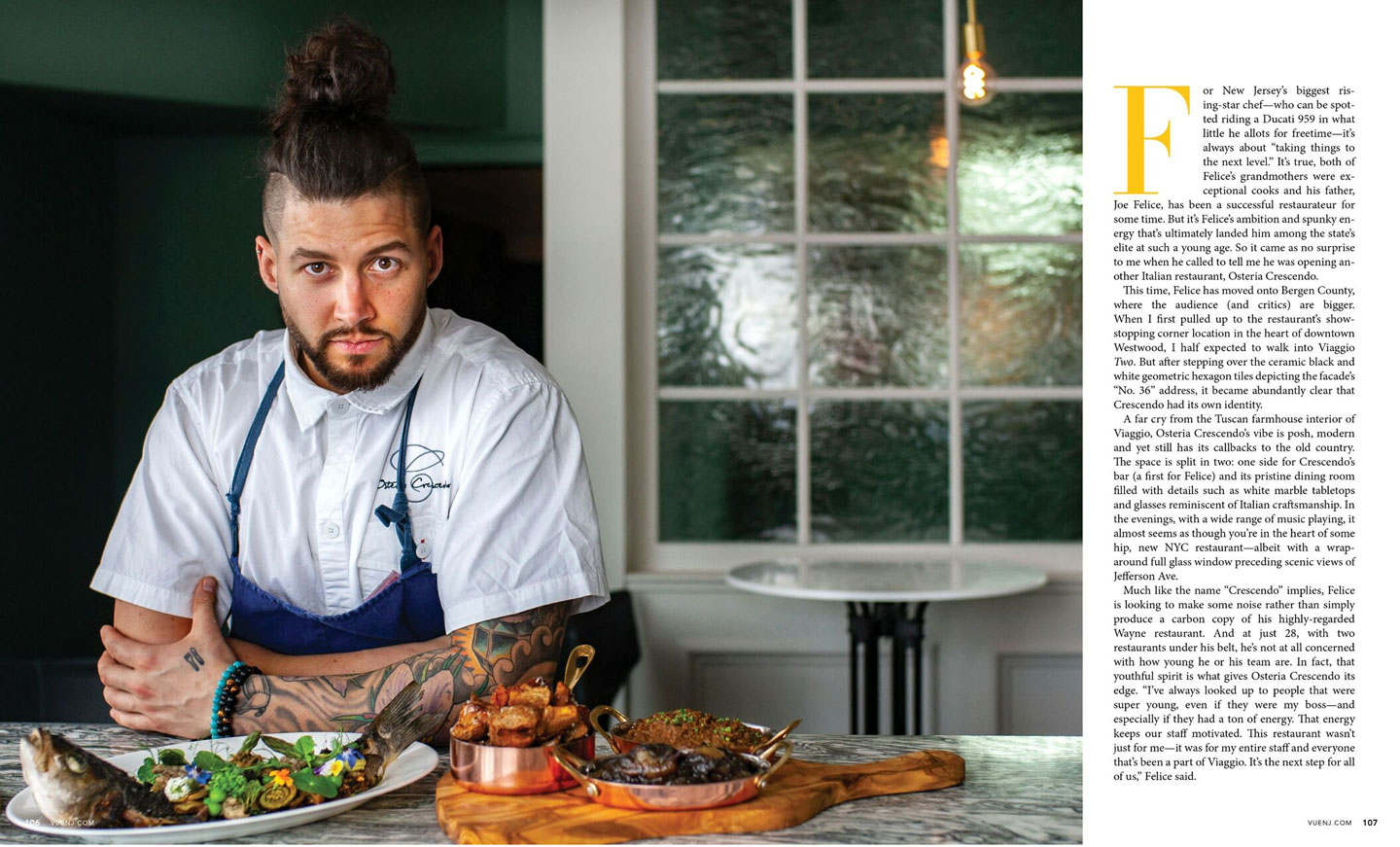 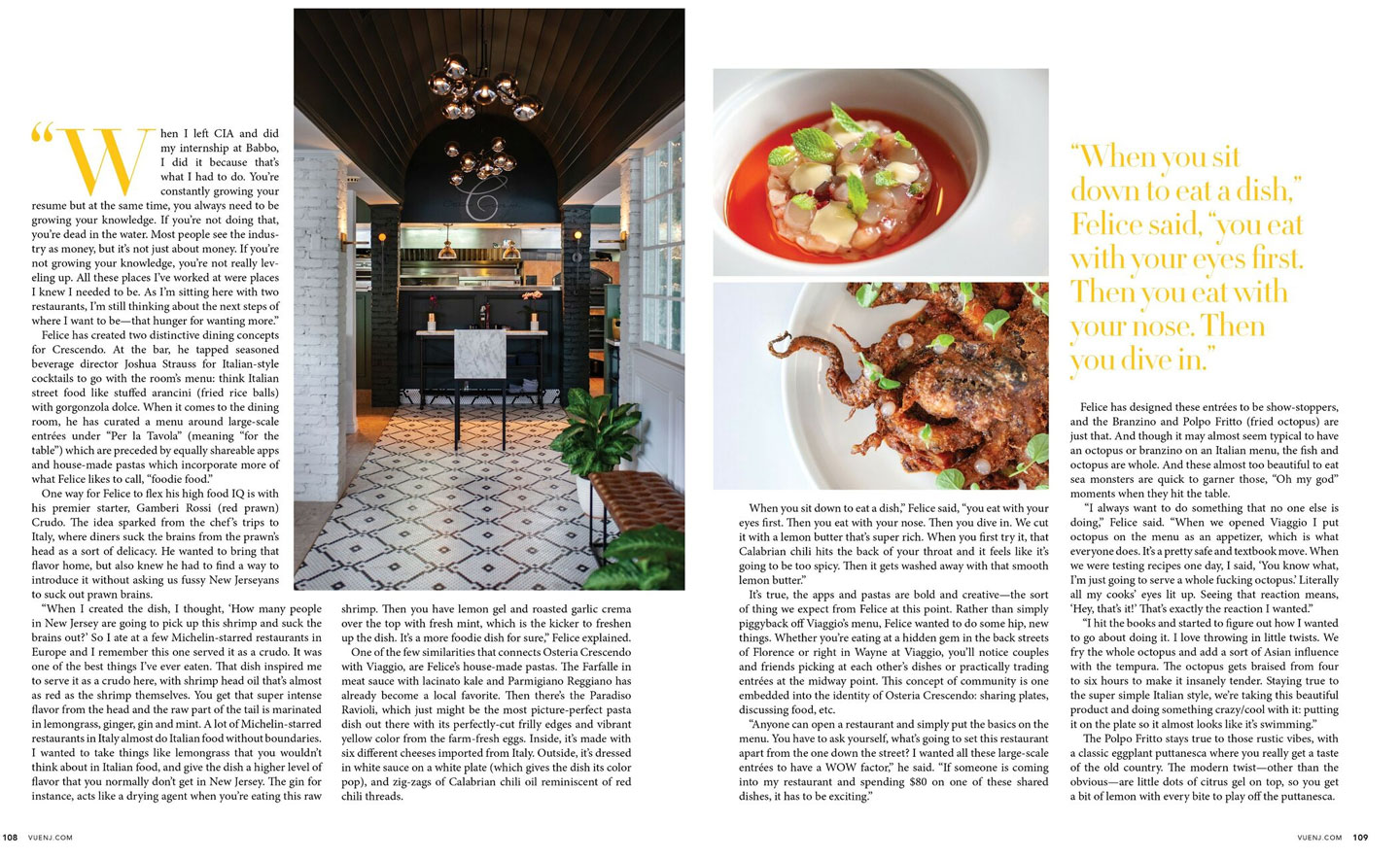 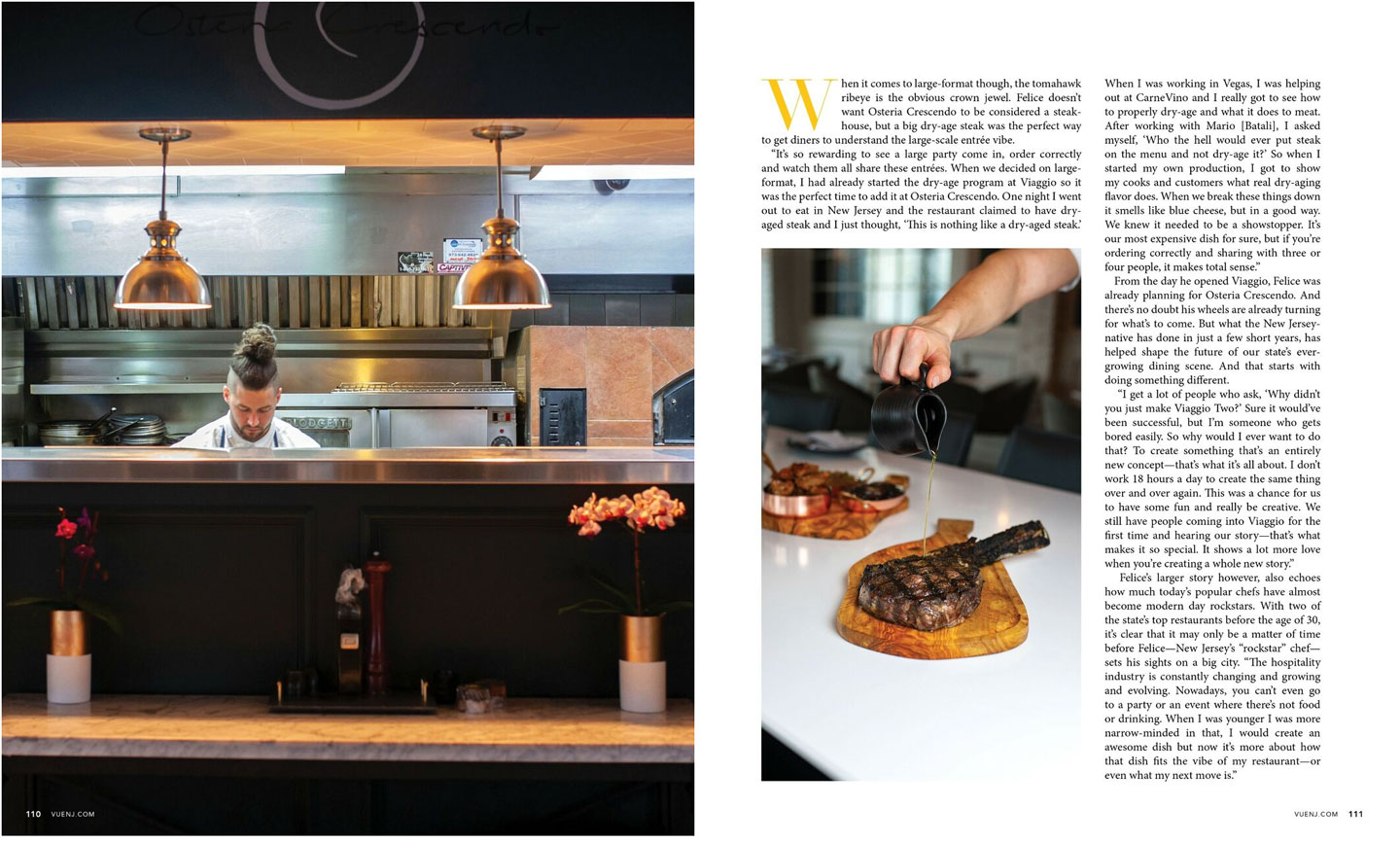 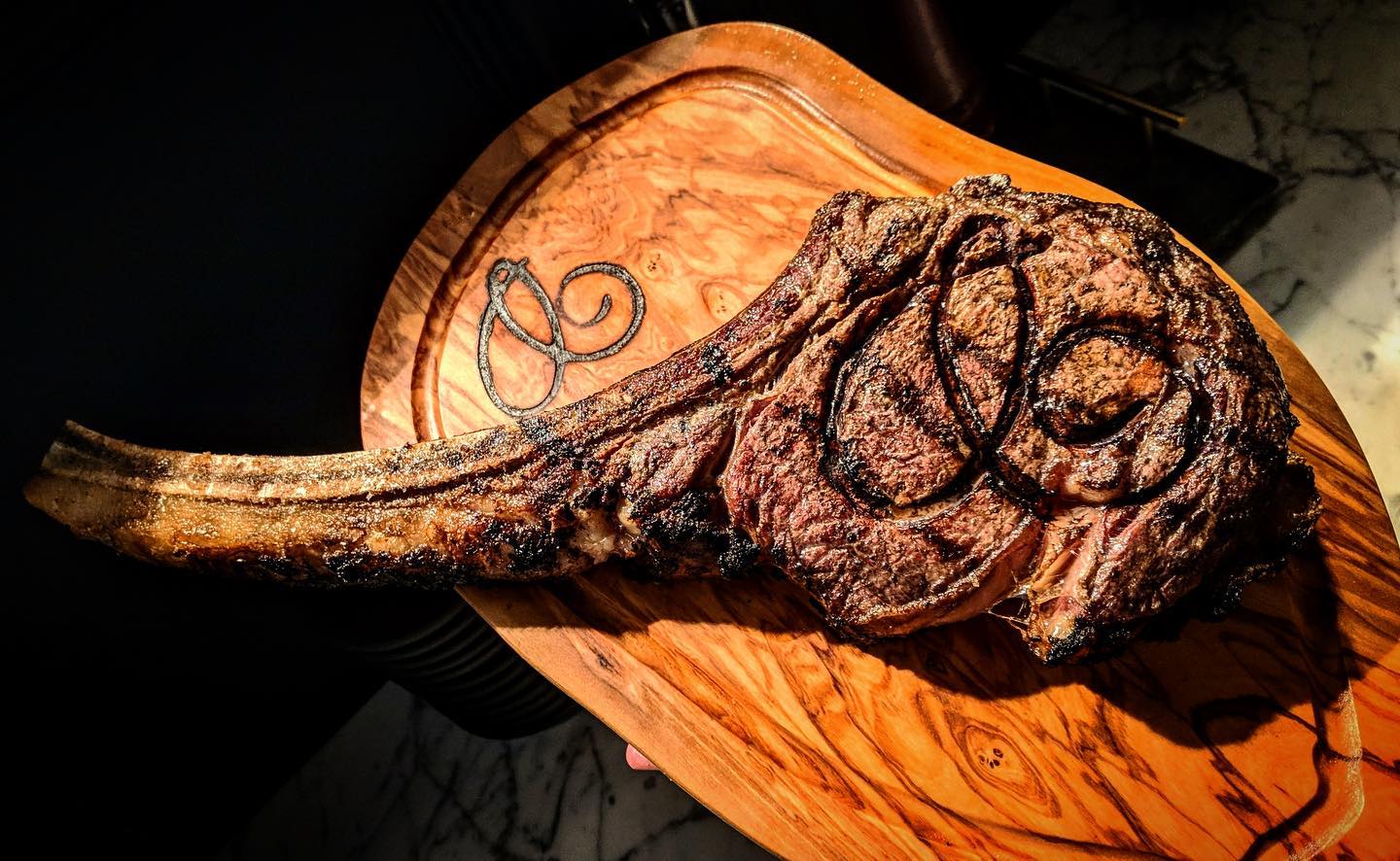 While you were waiting for spring to arrive, a slew of restaurants opened in North Jersey. Here are 5 restaurant openings you may have missed in the past few months:

The minute chef and owner Robbie Felice announced he would open a second restaurant, his fans could barely wait. They had tasted his homemade pasta, house-cured salumi, and unforgettable chicken cacciatore at his acclaimed Italian restaurant Viaggio in Wayne, and to have another spot to enjoy his culinary magic, well, that was thrilling.

That spot recently opened its doors to reveal a big bar, a first for Felice, and a modern, airy dining room that can seat 80. Its menu, not surprisingly, features hand-made pasta and house-cured salumi plus ethereal arancini. But unlike Viaggio, the entrées are meant to be shared: They’re served on a large scale — whole fish for two, including branzino with morels in a salsa verde ($59) and large in-house, dry-aged steaks such as the Tomahawk ribeye with rosemary potatoes ($159). Bring friends and dig in.

As for cocktails, Bei Sogni with Campari and egg whites should go well with Felice’s Italian fare or, better yet, that Italian classic, Negroni. Enjoy it on a sunny day around one of the sidewalk tables outside and don’t even hesitate for one second: The olive oil cake is a must. 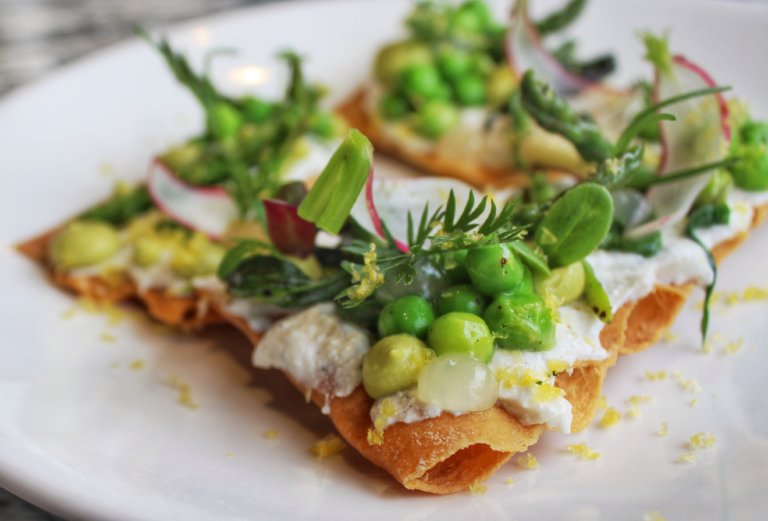 Robbie Felice, the culinary wunderkind behind heralded Viaggio (Website) in Wayne — including a current reign as one of the top 30 restaurants in New Jersey according to New Jersey Monthly magazine, has expanded his reach with the recently Osteria Crescendo in Westwood.

The restaurant has retained the liquor license from the previous owner — with the bar offering Cicchetti (or “snack”) that is chef’s take on Italian style street food plus wine, beer and a cocktail program (Drinks Menu) overseen by bar veteran Josh Strauss.

As Featured in Boozy Burbs 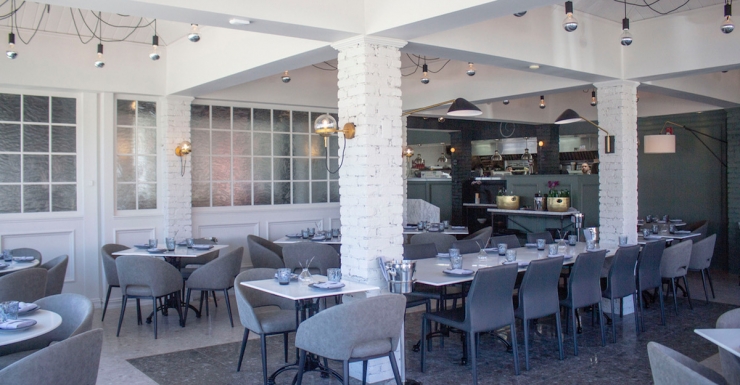 It’s a great time to be hungry in Bergen County, NJ. New, delicious restaurants housed in beautiful spaces seem to be popping up with delightful regularity. This week is no exception as the hotly anticipated new Italian farm to table restaurant, Osteria Crescendo opens its doors in Westwood NJ. We scored reservations and we were not disappointed!

Located on Jefferson Avenue in the old Baci space, Osteria Crescendo is helmed by chef/partner Robbie Felice who, after time spent in kitchens around the US and the world, returned home in 2016 to open Viaggio Ristorante in Wayne, NJ serving “locally sourced ingredients to create traditional Italian fare with a modern touch”. You’ll find the same culinary philosophy at Osteria Crescendo with their “per la tavola (for the table)” dining options like the Bistecca Fiorentina, intended to be shared by up to four people and Italian “street fare” offered at the bar. 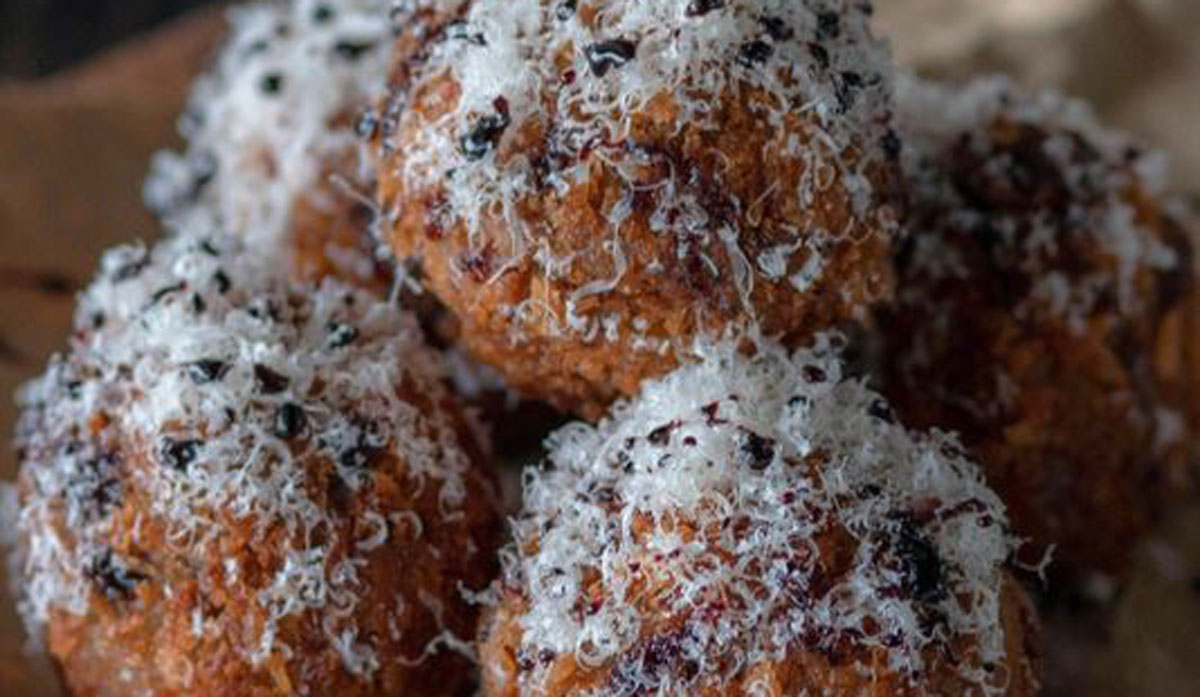 You can stop guessing where Robbie Felice’s second restaurant will be located in Westwood. Felice, the chef/owner of much-heralded Viaggio in Wayne, has confirmed that Oesteria Crescendo will replace Baci in Westwood.

When he announced that he would open a second restaurant, Felice did not want to reveal the location because, he said, Baci’s employees were not yet told of the 13-year-old restaurant’s closing.

“It’s sad,” said Baci manager Juan Mascaro. “But everything has to end.”

Felice has been anxious to have a second location. Full Article Here 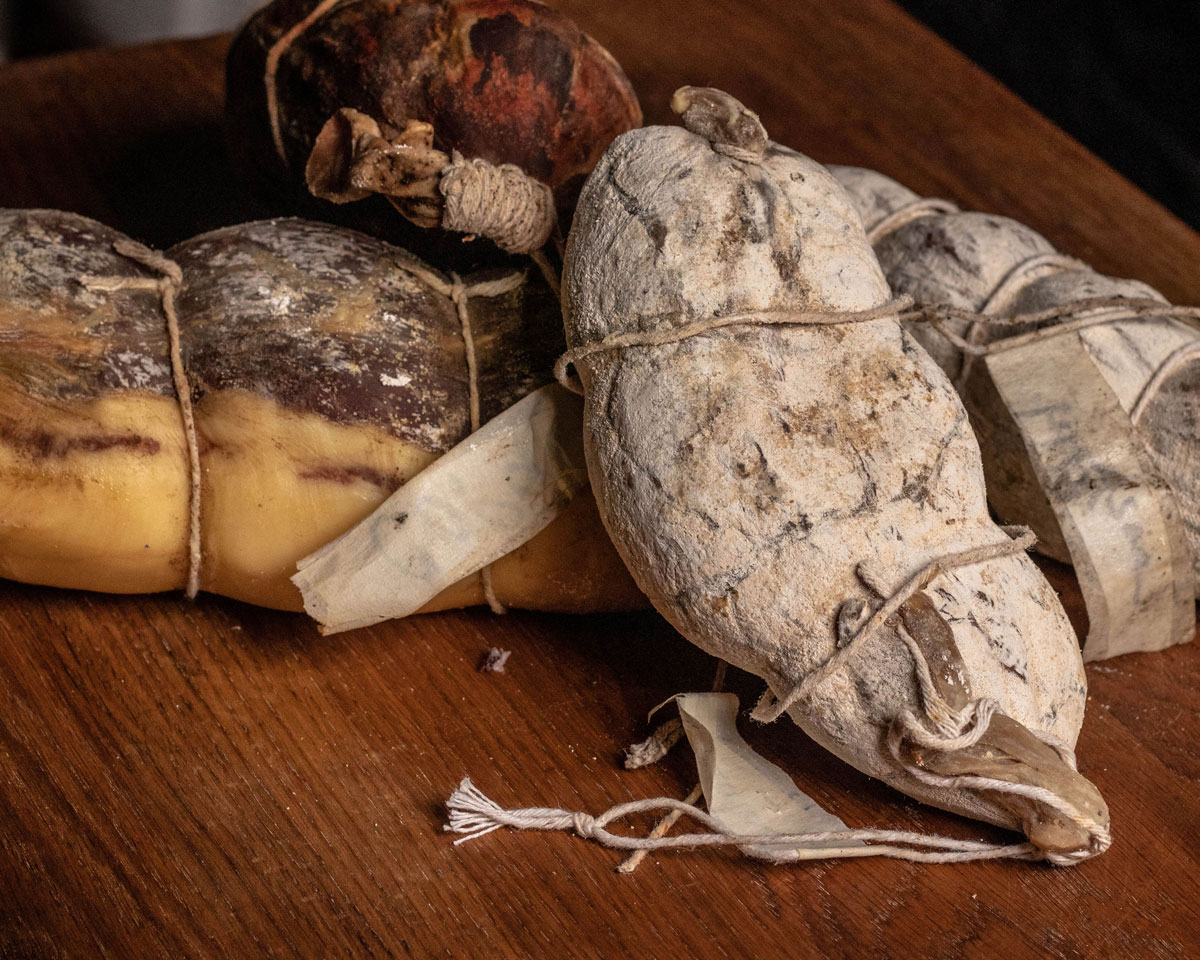 Osteria Crescendo, in Westwood, will feature Italian street food and, unlike Felice’s Viaggio in Wayne, will have a liquor license.
By Eric Levin | October 9, 2018

Not long after Robbie Felice opened his first restaurant, Viaggio, in Wayne, two years ago, when he was 26, he began dreaming of opening a second. First, he developed his team and honed his skills at making salumi and pasta, eventually earning a place on NJM’s 2018 list of Top 30 Restaurants in the state. Full Article Here

Robbie Felice, the acclaimed chef of highly venerated Italian restaurant Viaggo in Wayne, is set to open another Italian spot in Westwood.

Felice is waiting for a transfer of the liquor license currently owned by the restaurant he’s moving into. Until that happens, he said, he can’t be more specific about his new spot. Full Article Here 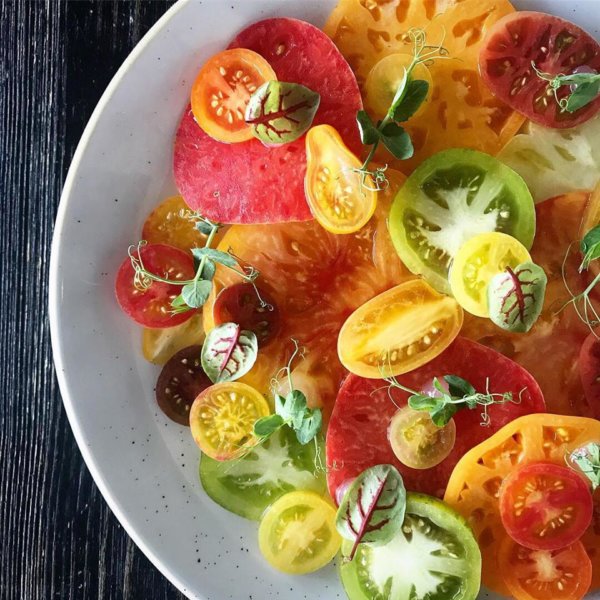 Robbie Felice, the culinary wunderkind behind heralded Viaggio (Website) in Wayne — including a current reign as one of the top 30 restaurants in New Jersey according to New Jersey Monthly magazine (Read Article), is expanding his reach with a new operation.

While details are very slim, the restaurant is named Osteria Crescendo, will be some kind of Italian restaurant, and will be located somewhere in Westwood. The restaurant will have a liquor license and the bar will offer Italian-style street food. Full Article Here